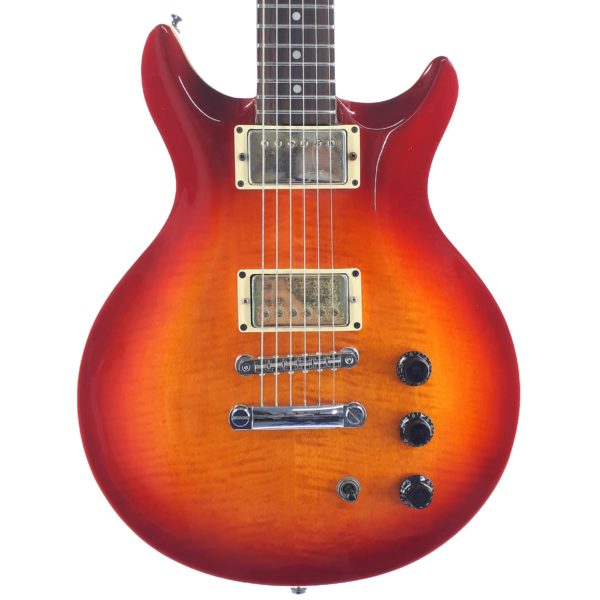 COUNTRY OF ORIGIN: Korea by Kaman

Hamer Guitars is an American manufacturer of electric guitars founded in 1973, in Wilmette, Illinois, by vintage guitar shop owners Paul Hamer, and Jol Dantzig. The company’s early instruments featured guitar designs based on the Gibson Explorer (The Standard) and Gibson Flying V (Vector), before adding more traditional Gibson-inspired designs such as the Sunburst. Hamer Guitars is generally considered the first “boutique” electric guitar brand that specifically catered to professional musicians, and was one of the first guitar manufacturers to produce a 12 string bass guitar.[2]

The company was incorporated in Illinois in 1976 by Montgomery, Dantzig, Walker and Hamer. It was acquired by Kaman Music Corporation in 1988, which was purchased in turn by Fender Musical Instruments Corporation in 2008. Hamer offered a wide array of electric guitars and electric basses and since its foundation, placed an emphasis on producing high-quality instruments with vintage aesthetics as well as creative innovations.[3]

Kaman marketed a lower-priced line of Asian-built instruments called the Hamer XT Series and Slammer by Hamer, which was discontinued in 2009.

After a 4-year hiatus since Fender had discontinued the Hamer models in 2013, the brand was re-introduced as a subsidiary of KMC Music, which announced the return of Hamer Guitars at the NAMM Show that same year.

Back to Electric guitars