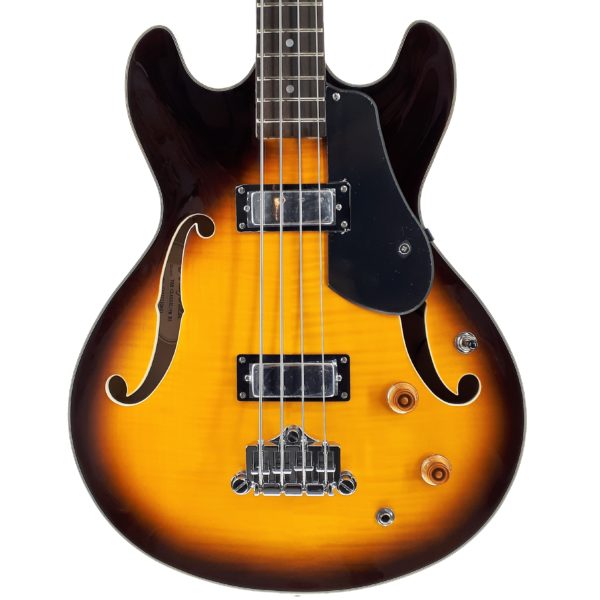 The Aria brandname denomination was changed to Aria Pro II in late 1975, though this has been used mostly (but not exclusively) for electric guitars and basses. All guitars were made in Japan until 1988, when production of less expensive models (Magna MAB/MAC and Integra IGB series) was switched to Korea and later on to China.

In the mid-1990s a few models (including the Fender Stratocaster-inspired Fullerton series guitars and the Steve Bailey 6-string fretless signature bass) were made in the United States.

Aria Pro II made some copies of established designs such as the Fender Stratocaster and Gibson Les Paul, in addition to original designs In the ’70s and early ’80s they produced a series of high end professional instruments. The company had endorsements from Michael Schenker, Yngwie Malmsteen, Neal Schon, John Taylor, Henrik Flyman, Loose Wayne and SS of Dark Frost and others. Cliff Burton of Metallica used an Aria SB Black N Gold I as well as an SB-1000 bass but was never an official endorser. He has a posthumous “Signature Model” called the SB-CB produced in Korea.

Another user of the Aria Pro II SB-1000 was Cronos of the band Venom. Some of the professional models were known as Firebrands because of the Firebranded Aria logo on the reverse of the headstock. The Firebrand guitars were produced in small runs. They were then given to either named artists who promoted Aria Guitars or to top dealers as gifts. Firebranded Guitars were produced to a higher standard than production models.

Aria has also built amps, such as the 10W Birdy.

Back to Electric Bass Guitars